Penney, who arrived in New York in a $13 suit and built Dynasty, is reconnecting with his home state by signing on a Brunswick breakaway

Brooke’s Note: I was born in Portland, Maine. I spent many summers in the 1970s and into the 1980s baiting irons on Freeport lobster boats, digging bushels of Harraseeket clams and shooting — and missing — in the direction of Pownal deer. I went to Maine schools with very bad-smelling hot lunches and kids who thought I was plenty spoiled because, as a child of Philadelphians, I was not steeped in all the ways of the state. I like to call myself a Mainer here in California but not in Maine. A real Mainer is not a person from a suburb carried in on a spore from Massachusetts. A real Maine town is where money is in low supply and natural beauty and lousy weather are abundant. It would be disrespectful, almost laughable. Being a Mainer is equal parts pain and love and the impossible task of separating the two. See: Merry Christmas: A nor’easter makes life interesting as RIABiz heads up to Maine. One person I know who left Maine, but who holds a lifetime exemption in calling himself a Mainer, is Shirl Penney. I was so glad he was able to attract this team of Maine financial advisors to Dynasty Financial Advisors and to use it as an opportunity to share Penney’s epic connection to the state and, as a result, to know and appreciate him all the better.

Number 28 was the charm. 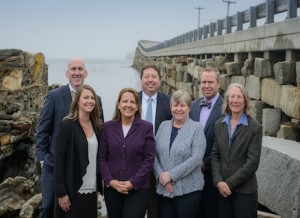 Scott Upham and Odette Galli are breaking away from the Augusta, Maine branch of Ameriprise Financial where they have worked together for the past two years. In the process, they are pulling in another advisor from a local LPL Financial firm, whom Upham got to know in his previous job as regional director for Russell Investments. John Duffy joins the two from Cumberland, Maine-based Duffy Anderson Investment Management LLC. Upham joined Cribstone in 2012, and Galli joined one year later. The three will form the new Cribstone Capital Management of Brunswick, Maine, named after a bridge in nearby Harpswell.

Penney, 38, and these advisors have a business plan for how to bring Maine-based assets back to the land of salt air, pine trees and pick-up trucks stacked high with lobster traps — often from advisors in Boston and New York.

“There’s no question that this deal speaks to me,” says Penney. “To be able to power a firm back in my home state feels great and I feel very confident these are the right guys for us.”

But that gets ahead of the story. 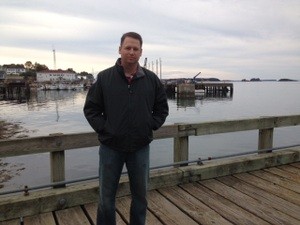 Shirl Penney was born in 1976 to a single mother in Eastport, Maine, a small, remote town a stone’s throw from the Canadian border. Eastport is in Washington County, the poorest in New England. Opportunities for advancement were scarce. His mother was very young, either fifteen or sixteen at the time, and unable to care for him.

Clarence E. Townsend raised Penney, who in turn created a scholarship in his name for high school students who have overcome adversity.

Yet instead of putting him up for adoption, his mother’s stepfather, Clarence Townsend, in the midst of a divorce from Penney’s grandmother, took Shirl home from the hospital and raised him alone. Townsend had dropped out of school after the sixth grade and worked manual labor jobs his whole life. The two lived on slightly more than $5,000 a year, a combination of welfare and what meager income Townsend was able to bring home. Penney soon learned where he could get hand-outs from restaurants at closing time. According to a 2014 Yankee Magazine article, during mackerel season Townsend would fill their freezer up and then for the following weeks and months “they’d eat fish until they just couldn’t any longer.”

When the little that Townsend could give Penney fell short, the Eastport community was there to catch and support the young man — kindnesses that went beyond the occasional free meal. When Penney was in fifth grade his home was condemned and razed to the ground leaving him homeless. A neighboring family took Penney in for two years as carpentry students from the nearby Passamaquoddy Indian Township built them a new house with materials bought by the state.

Townsend, who died in 1999, now has a memorial scholarship named his honor. It is awarded annually to a high school senior from Eastport who overcame adversity while maintaining a positive attitude.

You can get there from here

Above all else, Townsend wanted a better life for Penney than the one he himself had led. He pushed Penney to get a college degree so he wouldn’t have to work the same brutal, low-paying jobs his whole life. Penney managed to earn a partial scholarship to Bates College in Lewiston, Maine, and took out loans to finance the rest.

Wall Street and the stock exchange had fascinated Penney from an early age, and he often told skeptical listeners that’s where he was headed. His break came during the summer of his junior year at Bates when he interned at the Portland branch of Smith Barney. He heard an executive from New York headquarters was visiting the branch he begged for a 30-minute interview. The two ended up speaking together for almost an hour and a half. From that meeting, Penney was invited down to New York to formally interview for a job. He showed up at the Sixth Avenue office after a sixteen hour bus ride in a $13 suit bought from the Salvation Army. At that point, a year away from graduating from college, Penney says he had never seen an escalator or been through a revolving door.

He earned a job after telling Smith Barney executives no one would ever outwork him, and 16 years later he still hasn’t let up. Penney says his typical working day is from 7 a.m. to midnight (he lives within walking distance from his apartment).

Penney shot through the ranks at Smith Barney before founding Dynasty Financial Partners in 2010. But though he and his wife now have a home back in Eastport, the company he founded five years ago hasn’t, until now, had any sort of a presence in Maine.

Scott Upham and the Cribstone Bridge:

Many of the families we work with are deeply passionate about the state and somewhat distrustful of large corporate interests from away.

Cribstone hopes to grow by pulling in disgruntled advisors from around the region. Now that it has beefed up its technology and research with Dynasty’s help, it is pitching itself as the local equivalent of the bigger, Wall Street-connected firms from out-of-state.

“Many of the families we work with are deeply passionate about the state and somewhat distrustful of large corporate interests from away,” says Upham, co-founder of the firm. “Cribstone Capital Management was founded as a regional firm in Maine and is very much built around our desire to keep our clients’ money management services in Maine.”

There is a class of assets Upham especially covets.

“We find it troubling that most Maine nonprofits go outside the state for investment management and revenue from those endowments fellows,” he says. This is particularly disappointing to Cribstone’s founders because those nonprofits are often dedicated to improving the area’s living conditions and economy.

“Maine is absolutely a very proud state and in general Mainers would prefer to work with other Mainers,” says Penney, “but often times you do see institutions go outside to get that consulting.”

This doesn’t necessarily surprise local advisors. “It’s not like there’re not obvious reasons for this,” says one working in Portland who asked not to be named. “There’s a perception that if you’re working with an advisor in Maine, you’re probably getting the B-team. If you’re worried about making bad decisions it’s a lot less risky to go with the guys from Boston or New York.” See: Why the slow-evolving metro New York area is still on course to be the capital of the RIA business.

Not including branches of national firms, Maine has seventeen RIAs serving a population of 1.3 million. It is the only state in New England with a per capita income rate below the national average, and much of the wealth is concentrated in the southern half of the state around the Greater Portland area. With its breakaway, Cribstone becomes the largest Maine RIA not based in Portland.

Upham says Cribstone’s growth was the catalyst for its breakaway from Ameriprise. The firm had developed significant business scale, serving 250 clients and hundreds of millions of dollars, and wanted technical capabilities that would carry it through its next stage of growth. Most pressing was the need for stronger tools to evaluate risk and help rebalancing client portfolios.

Cribstone’s situation is one that Penney is seeing more and more these days: large independent-broker dealers that have outgrown their retail chassis and need a more comprehensive platform.

A spokesman for Ameriprise did not respond to requests for comment.

Use of these varied technology programs Dynasty’s new advisor dashboard, which allows users to easily switch between different systems, was all the more enticing. Penney says his firm dedicated much of its efforts towards finalizing this product before it launched on April 15, an endeavor he claims accounts for Dynasty’s relatively slow pace of new partnerships this year. See: Schwab wins $350-million Philly RIA from Wells Fargo Profit-Formula program with Dynasty Financial’s help.

But ultimately, it was Dynasty’s Maine connections that cemented the Cribstone deal. Upham says he and his team were “jazzed” when they found out both Penney and the company’s director of advisor integration, Jason Pinkham, are Mainers. Pinkham was raised Downeast in Milbridge, population 1,353 and like Penney attended Bates College, graduating in 2002. Cribstone’s Brunswick headquarters also happen to be on the road to Eastport (though another four hours down the coast) and Penney says he was able to stop in to meet the team for due diligence meetings and help with the transition.

Sanders Wommack, who wrote this article, knows a thing or two about Maine, too. He grew up in Harpswell, followed by Yarmouth and knows that the latter places are properly pronounced Yeahmeth and Hoppswool.

Since breaking away from Smith Barney in 2010, Shirl Penney has signed on 27 RIAs, mostly breakaways, and their combined $23 billion of advised assets, to join his very Manhattan one-stop outsourcer. See: What exactly is Dynasty Financial Partners and why is the Smith Barney execs’ startup gaining so much attention?.

His watchamacallit company, Dynasty Financial Partners, is an attempt to recreate Wall Street on Main Street for the wirehouse corner office broker who wants to retain Wall Street capabilities but not its sales-tainted effluent — financial advice of questionable quality delivered at even more questionable prices. See: The top 10 people to watch in the RIA business in 2012, Part 2.

But for all Penney’s efforts to create a home for advisors who didn’t want to live by Wall Street’s rules anymore — and create a home for himself in the bargain — he still longed for a greater business connection to his native Maine.