We all probably have never felt so ready to close the door on a year.  2020 provided more twists, turns, and tragedy than any of us were prepared for, with COVID-19 leaving both human and economic devastation.  The human impact that occurred in 2020 is familiar to us all, so we will keep our comments here centered on the economy and investment landscape.  The chart below summarizes the US economic performance well, showing the factors contributing to GDP growth. The dotted blue line reflects the annualized percent growth of GDP from the prior quarter, with any period of two or more consecutive quarters of negative GDP growth constituting a recession. 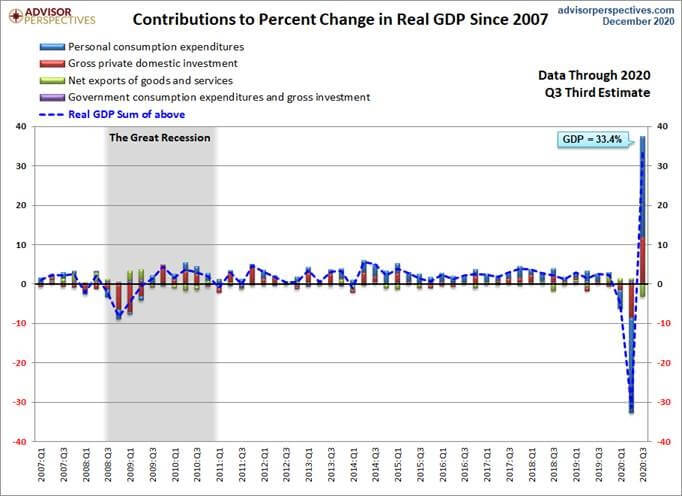 As evident in the chart, while COVID-19 was in the news in January, its prominence escalated by the day in February, particularly as China enforced lockdowns.  It then hit the US, first in Seattle followed by cases exploding in New York in March.  The US economy felt the impact in the first quarter but only marginally, as GDP declined by 5%.  In the second quarter, the US economy did something it had never done before, declining by a greater than 30% annualized rate.  Both consumers and corporations simply took their money and went home, turning off the lights as they went.  It made the 2008 Great Recession look like a speed bump.

As the first wave subsided and economic activity resumed, the economy bounced back buoyed by new avenues of demand, such as home restoration projects and equipment purchases to enable work from home, and support from the Federal stimulus provided under the CARES Act.  As sharp as the decline was in the second quarter, the third quarter matched it almost to the number.  David Kelley, the chief economist at JP Morgan, equated it to someone ‘jumping off a cliff onto a trampoline’ – the fall is dramatic but the bounce back is impressive.[1]  The question then remains – is this the beginning of a new bull cycle?

There are reasons to be optimistic. Unemployment has been declining for months after peaking at almost 15% in March, although recent waves of infections have walked back some of the progress.  The most recent headline number of 6.7% unemployment looks positive, although that has been helped by the drop in the labor participation rate from 63.5 to 61.5, which might reverse as things normalize.  The vaccination process is progressing, and there is hope that it will be effective against the new COVID strains that have emerged.  Most importantly for the markets, the Biden Administration has promised continued fiscal stimulus, and we expect to see another round of checks being mailed to people possibly as early as the first quarter on top of what was sent in December.  Another $284 billion of Payroll Protection Program (PPP) also passed Congress in December, further helping companies bridge the gap to better times.  While we feel these measures are important, it is unclear how quickly consumer behavior and spending patterns will revert back to pre-COVID levels, or whether the personal and economic shock we have experienced will have a lasting impact.  In case of the latter, the stimulus money might just be stored away as savings for a rainy day instead of providing the intended economic boost through higher household spending.  We have seen this trend in the last few months, as the components of bank balance sheets that are expanding most rapidly are government bonds (+25% year over year) and cash (+90%), while growth in private sector credit (which signals economic activity) has been close to zero over the past nine months.

Meanwhile, the exuberant behavior of the market has continued.  The current Cyclically Adjusted Price to Earnings (CAPE) ratio, which is a measure of how cheap or expensive the market is trading based on earnings, is close to 35x for the S&P500 index.  There has only been one other time the equity markets in the US have looked more expensive and that was during the tech bubble in 2001.  With real yields negative, money is piling into equities and has increasingly become more and more speculative in recent months.  You may have heard of penny stocks (micro-cap stocks that trade on the “pink sheets”), showcased in the 2013 film “Wolf of Wallstreet,” where Leonardo DiCaprio predatorily sells these risky investments to unsuspecting investors.  According to Bloomberg News, more than 1 trillion shares of such companies have changed hands in the last month!  We saw over 480 IPOs and 248 SPACs (which are essentially blank-check companies where investors give a management team money to go buy a company without knowing exactly what that will be) hit the market in 2020, superseding the 406 IPOs that occurred in 2000.  And the performance of a number of these IPOs has been no short of spectacular, with stocks doubling or even tripling from the issue price on the first day.  And investors are more and more willing to take on levered bets.  Nearly 22 million calls have been traded across US exchanges over the last 30 days, which is close to an all-time record.  And tweets are making millionaires – when Elon Musk told his followers to download Signal, a competing messaging service to WhatsApp, the shares of Signal Advance Inc. surged more than sixfold.  The only problem was that Signal Advance is a medical device company, whereas the owner of the app Mr. Musk was referring to is Signal Foundation, a non-profit!

As prominent economist Keynes is quoted to have said, “The market can stay irrational longer than the investor can stay solvent.”  However, the notion of being fearful when others are being greedy is on top of our minds at this point in time.  We continue to weigh the risks in the current market and remain committed to holding back some ‘dry powder’ in the event we see any market corrections.  Adding to equity exposure as the market fell last year was one of the biggest drivers to portfolio balances recovering so quickly.

In other matters, many of you have already received some tax forms from Charles Schwab.  We would like to point out a few things in regards to these 1099 forms.  First, this most likely will not be the final version of your 1099.  Schwab, and most other custodians, will receive updated information and issue a “Corrected” version of the 1099.  Last year, the final version came out in the last week of February.  Second, for those drawing down from funds in qualified accounts, you will receive a 1009-R form that will show how much was withdrawn.  If you gave money directly from your retirement funds to charity, it is important to make your tax preparer aware of that amount.  The Schwab 1099-R form does not highlight or keep track of any money directed to a charity that would be non-taxable.  Thus, simply entering the data as it appears on the form will not get you credit for any donations you have made.  Please let us know if you need any help in finding those totals.  Lastly, for those of you that rolled back in any withdrawals in 2020, please be sure to let your tax preparer know the amount rolled back as the 1099-R reflects only the distributions.  The rollover amount is not taxable.  Schwab will provide a Form 5498 showing the contributions/rollover amount prior to May 31st for your records.

As always, we appreciate your partnership and are grateful for all your support over the last year.  We are always here to connect and wish you and your family all the best in 2021.

Contributions were made to this letter by Amyn Moolji, CIO and COO, Jeffrey Burch, and Taylor Haselgard.

Cribstone Capital Management (“CCM”) is an SEC-registered investment advisor located in the State of Maine.  The firm and its representatives are in compliance with the current registration and notice filing requirements imposed upon SEC-registered investment advisors.  CCM may only transact business in those states in which it is notice filed or qualifies for an exemption from notice filing requirements.  For information pertaining to the registration status of the firm, please contact the SEC on its website at www.adviserinfo.sec.gov.  A copy of the firm’s current written disclosure brochure discussing the firm’s business operation and fees is available from CCM upon request.