There have been many nostrums shared about the stock market, but few are as reliable or as relevant as the phrase about the Federal Reserve coined by the late Marty Zweig.  Included in his famous book, Winning on Wall Street, are many of Zweig’s timeless insights about the enormous influence—if not dominant factor—Federal Reserve policy, largely in the form of trends in interest rates, has on stock prices.  And there’s hardly a better example of Zweig’s observation than how the stock market has behaved over the past six months.

First a little about Marty for those of you who never heard of him:  Born in Cleveland, Ohio in 1942, Marty had shown himself to be an early stock market prodigy.  He earned his fame and fortune in money management and with the top-rated eponymous newsletter, The Zweig Forecast.  His opinions were often sought after but became even more so after he famously predicted the October 1987 stock market crash.  On the night of Friday, October 16, 1987, Zweig was making one of his regular appearances on Wall Street Week with Louis Rukeyser.  In response to a question from Rukeyser about the direction of the market, Zweig famously said, “I haven’t been looking for a bear market per se, I’ve been really, in my own mind, looking for a crash.”  The following Monday, the market “crashed” 23%.

At this point in time, prognostications are all over the map as to the direction of the market.  We would never pretend to have any particular edge in forecasting where stocks go from here.  However, we also recognize that it pays to keep a close eye on Federal Reserve policy.  Case in point:  As we noted last fall, and again in January of this year, the Federal Reserve had been in a policy “tightening” mode:  raising interest rates and reducing bond purchases (also known as quantitative easing) in order to prevent the economy from overheating and inflation accelerating.  As recently as December of 2018, the Fed was sticking to its forecast of another two rate hikes in 2019.  But in doing so, they seemed to have spooked everyone into thinking that they were taking their policy too far.  That, compounded by uncertainty over trade talks with China, caused the dramatic sell-off we witnessed late last year.

Likewise, we can probably thank the Fed for the strong rebound we’ve experienced in the first quarter of this year.  As early as January, the Fed started backpedaling from its tightening stance.  Indeed, after the Board’s February 26th meeting adjourned, Chairman Jerome Powell declared that the central bank would take a “patient approach,” as it considered future rate hikes.

Then at their last meeting on March 20th, the Fed Reserve Board Governors took even more dramatic step: they abandoned plans of raising rates this year altogether.

On top of that, the Board downgraded expectations for Gross Domestic Product (GDP) growth this year to 2.1% from 2.3% (compared to 2.9% growth for 2018).  According to the fed-fund futures market, there’s a significant probability that before the end of this year, the Fed may actually cut rates.

With rate hikes evidently off the table for this year—and the possibility of a cut becoming more accepted—stocks have responded.  By the end of March, the S&P 500 chalked up its best quarterly gain in nearly a decade, jumping more than 13%.  The chart below shows the inverse correlation between the S&P 500 and the 10-Year Treasury Rate from January 1, 2018, through March 31, 2019. 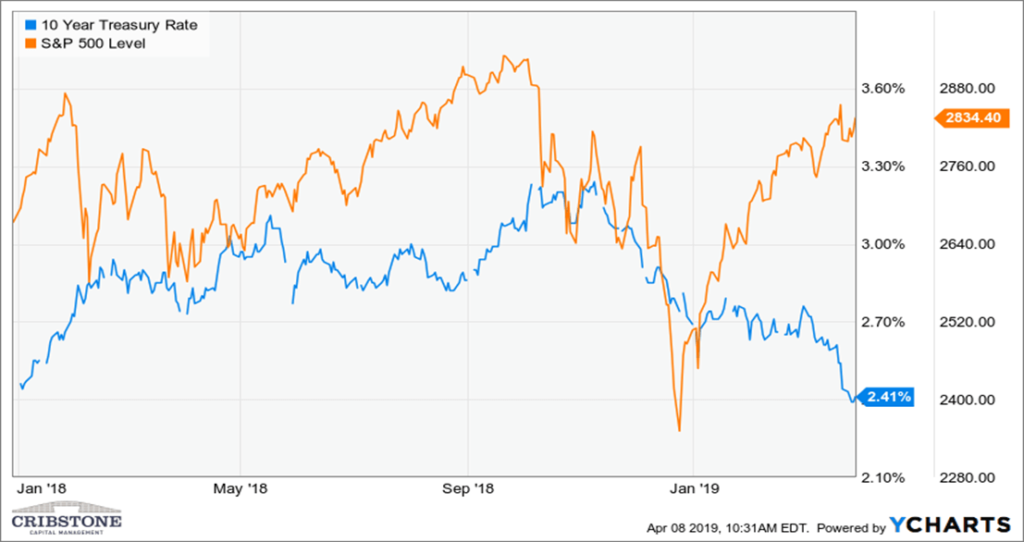 Aside from a more “accommodative” Federal Reserve policy in place, there’s also ample data to support continued growth for the economy and corporate earnings, albeit at a slower pace. And that could lead to further gains for equities.  These come mostly from the all-important consumer (two-thirds of economic activity):  unemployment is low, wage growth has improved and household debt, while at a historically high level in absolute terms, is manageable as a percentage of income. Speaking at a news conference March 20th, Powell said the U.S. economy was in a “good place.”

But we think it pays to stay somewhat cautious.  Both the housing and auto markets have cooled meaningfully.  The manufacturing sector has also weakened:  The latest reading from the Institute of Supply Management showed that its Purchasing Managers’ Index fell to 54.2 in February, hitting its lowest level since November of 2016.

Across the oceans, the picture is bleaker.  Brexit chaos in the U.K. and yellow vest protests in France have created an uncertain environment for business activity in those countries.  Germany, long the anchor of economic growth in the region, has sputtered—according to FocusEconomics, growth in Germany has been downgraded to a meager +1.0% in 2019.

China, meanwhile, is grappling with a slowdown of its own:  After expanding 6.6% in 2018, its lowest level of growth in decades, its policymakers in March lowered their official growth target for 2019 to a range of 6.0-6.5%, according to Bloomberg.

In response, the regulatory bodies that impact monetary and fiscal policy overseas have pivoted toward a more benign approach.  Mario Draghi, the head of the European Central Bank announced at its latest meeting last month that ECB would refrain from increasing interest rates.  Likewise, China’s Premier, Li Keqiang announced in early March that the government would cut business taxes significantly in order to halt its economic slowdown.

Despite having these policy tailwinds across the globe, we will be keeping an eye on how much growth is slowing.  As we publish this newsletter, first-quarter earnings are being released and aren’t expected to be strong.  Indeed, according to FactSet, earnings for S&P 500 companies are expected to drop 3.9%, which would mark the first year-over-year decline since the second quarter of 2016.  But even more important for stock price behavior will be what company executives have to say about the rest of this year.  At the moment, FactSet pegs the estimates for earnings growth for all of 2019 at +3.7%.

But don’t fight the Fed:  When it comes to stocks, we are maintaining our well-diversified equity exposure across the board.  We continue to prefer companies with strong balance sheets and viable long-term business models that we can acquire at reasonable valuations.  We are also focused on positioning our exposures in a way that we think will help mitigate downside risk should economic and earnings growth for this year disappoint.

By the time you receive this newsletter, many of you will have filed your taxes by the April 17th deadline (for Maine).  But if there are any other lingering questions or needs you have around your tax situation, or about the work we are doing for you, please don’t hesitate to ask.