What is perception and what is “reality”? This seems to be the common thread today as people more than ever are inundated with information and an abundance of polarizing viewpoints. The markets are not immune to this. Investors are overwhelmed with daily headlines concerning US-China trade talks, Brexit, unrest in the Middle East and Hong Kong, election campaigns, and more recently potential impeachment proceedings. Combine this with uncertain economic data and rate cuts, and the result is a volatile US Equity market that has been effectively flat through Q3’19 despite significant drawdowns in August, and only slightly up in the twelve months ending September 30. 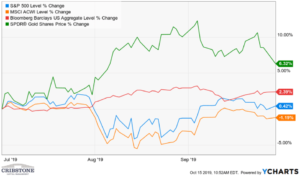 At the same time, bonds have outperformed US Equity markets by almost 2% as the yield curve has flattened, with longer team yields dropping ~0.40% versus shorter/intermediate treasury yields at ~0.2%. Gold similarly has benefited from this period of volatility, with significant inflows to the asset class.

Looking forward, many of the issues remain. The IMF (International Monetary Fund) sees the world economy growing at only 3% this year, the weakest global growth since 2009. For next year, GDP growth in the US is expected to be below 2% and analysts see a 1 in 3 chance that the US economy experiences a recession. According to the ISM data (Figure 2), both the manufacturing and the non-manufacturing sectors peaked around a year ago. In fact, in September of this year, the ISM Manufacturing index dropped from being slightly expansionary at 51.7 to being contractionary at below 48.

Part of this decline can be credited to a decrease in industrial exports due to trade talks. However, we also see a deterioration in production, order backlogs, and inventories. The Non-Manufacturing index appears to be following close behind, although thus far remains in expansionary territory. Corporate profits reflect similar trends with earnings for S&P 500 expected to be down ~4% for Q3, after being just shy of breakeven in Q1 and Q2.

One argument most often presented against a possible recession is the health of the US consumer, which contributes ~70% of US GDP. Unemployment is at a 50-year low, and household debt service payments as a percent of disposable income is the lowest it’s been since 1980. That said, consumer confidence levels for breadwinners between 35 and 54 per the University of Michigan survey slipped from 96.1 to 94.6 in September. And, household spending is in a gradual decline as employment and income growth decelerates (Figure 3).

In a recent Bankrate survey, almost 48% of respondents who were adults during the 2007-2008 downturn said they have seen no improvement in their finances since that time, with 54% of all surveyed responding that their wages and salaries have not recovered to pre-recession levels. The survey estimated that 40% of Americans are not ready for a recession and that in preparation 44% would cut back on their spending.

The other savior against recession is the Federal Reserve. Q3 saw two 25 basis points cut in interest rates, with the market pricing at least one more in Q4. The Fed has also moved to calm down the spike seen in overnight repo rates with a commitment to purchase roughly $60 billion of T-bills from now until mid-Novembers and further as necessary to “maintain an ample supply” of liquidity to the market. This move almost rivals $85 billion in bonds that the Fed bought monthly in the final round of quantitative easing back in 2012. The risk, of course, is that if these “insurance cuts” are not enough to stave off a recession, the Fed does not have much more room to ease, which could result in a worse recession and a slower recovery than would happen otherwise. And with already $22 trillion in Federal debt that is expected to grow to ~$29 trillion by 2029, the potential for fiscal stimulus also appears limited.

The market is still trading relatively rich compared to historically adjusted earnings multiples (Figure 4). If you look at peak CAPE multiple for this cycle of ~33x from last year versus a reasonable trough multiple of ~22-23x, the risk remains slanted to the downside (+10% versus -20%).

Given these economic expectations and uncertainty surrounding international and domestic policy, we continue to maintain a slightly defensive tilt in our positioning. Our allocations to non-correlated assets in Gold and BXMIX along with a significant position in Managed Futures, should help dampen the volatility and allow us to reallocate capital in a more effective manner in the event of a prolonged correction.